Have you been in to the Scottish Thistle? And seen the enclosed booths? We thought everyone would like to know a little bit of the inspiration of why we wanted to add them to our restaurant.

The enclosed booths are actually called Snugs. Back in the Victorian era, over in the UK, women were not supposed to be seen in Public Houses (Pubs) and certainly not seen drinking. That did not stop the Scottish and Irish women from drinking as you would imagine! Their answer was to have special booths in the Pubs. Those booths were completely enclosed so no one could see who was in the booth. They were enclosed by doors or curtains. The other interesting thing was the booths were placed right next to the barkeep with a special door on the back side of the booth so alcohol could be passed into the booth without opening the front of the booth. 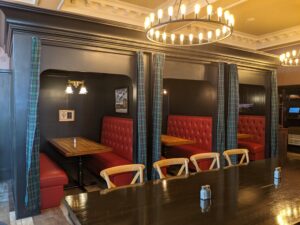 As time went on, snugs went from hiding women drinking, to being used for private business meetings, and now we use them for date nights too. We put up some plaid curtains so just in case you wanted privacy you could have some. We hope you enjoy our Snugs!